In the old days, a contractor would have to dig down outside a house to fix a crack in a foundation. Any plants or structures like a deck would become casualties. Next would come to the mastics, tars, or membranes on the outside, which is great when you’re building a house but not once the house is already built.

“Lou always used to say that approach was kind of like mouse hunting with an elephant gun,” says Marge Kaminski, who provides sales and technical support at Emecole Metro near Chicago. Lou Cole founded Emecole in 1987, after receiving a double master’s in chemical and plastic engineering from Penn State University and then beginning his career as a chemist at Union Carbide. His entrepreneurial spirit led him to earn an MBA so he could start his own business. Cole developed a network of contractors who serviced cracked basement walls, and a common discussion was how inefficient basement wall crack repair was. 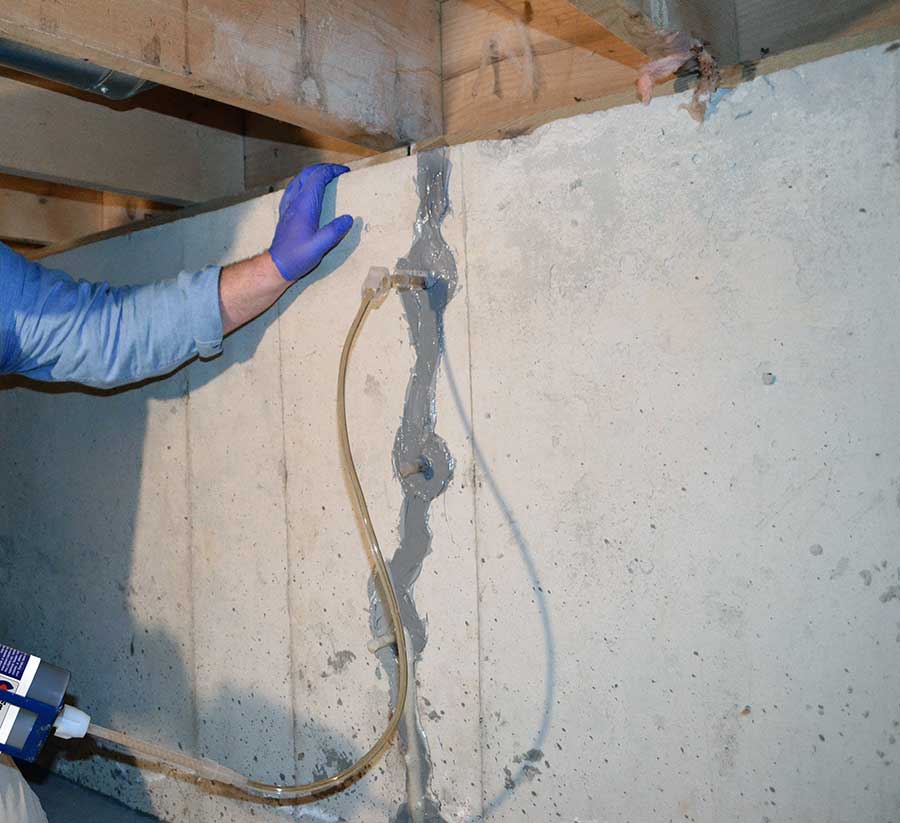 Injecting into a crack.

Cole was the first to develop an efficient two-component crack repair system based on the convenience of the standard caulking gun. This used a smaller volume of injection material, injected at low pressure, with less material needed, and less time on the job. He then went on to develop his own line of epoxies and polyurethanes specifically for crack repairs.

About 90% of the cracks in basements are simply shrinkage cracks. These cracks will form during the curing phase when the foundation is poured. As Jay Schmid, general manager of Polygem, Inc., a manufacturer of epoxy and polyurethane crack injection systems, explains shrinkage with a sponge analogy — a dried out kitchen sponge shrinks. “Concrete is at least 30% water by volume,” he says. “So when you pour the concrete, 30% of the weight of that mass is going to disappear. That loss of volume causes shrinkage.”

Non-structural cracks can be sealed with either a polyurethane foam, with the intent to keep moisture out, not to reinforce the concrete, or an epoxy resin that will bond the crack back together. By injecting with polyurethane as opposed to just sealing the surface, you’re preventing minerals and soil gases from penetrating the concrete. “This fills it, basically, front to back from basement to dirt with the foam,” she says. The foam allows a little bit of flexural movement in the concrete which is a normal occurrence from temperature changes and the soil pressure that can change due to the wet/dry cycles of the seasons.

Epoxies, on the other hand, are used for structural reinforcements. They are like a “super glue” that does not allow for any movement. If there is still movement, something Kaminski calls a sister crack can develop a couple of inches away from the original crack. You can address the crack, but not the movement or the cause of the problem. Carbon fiber (addressed below) is used if there is still movement. Some of the success of epoxy injection depends on the skill of the contractor because epoxies typically take 15 to 20 minutes to gel up, so they can flow out the back of a crack during that time period. “The chemicals will do the work, but if the contractor doesn’t have the patience and tries to overcome gravity too quickly, no one’s products will be able to fill that gap,” Kaminski says.

Emecole’s products are very high grade. An analogy Kaminski uses is that Emecole’s products are medical grade as opposed to food grade, and the company offers four viscosities — low, medium, high, and extra-high — per epoxy, with two different types of epoxies specifically for injection. Low viscosity is similar to water, the medium is like honey, high is like thick motor oil, and extra high could be likened to peanut butter. The viscosity you choose will depend on the width of the crack. “You don’t want to pour ‘water’ into a crack that’s half an inch thick,” explains Kaminski, “so you would then move on to either the motor oil or peanut butter, so that it has a chance to fill the eight or 10 inches of a wall, giving you a full repair without losing product outside the wall.”

Polygram has over 1,800 formulas of epoxies, patching materials, and more. They offer injection resins (structural epoxies) in five viscosities, from cooking oil viscosity to Vaseline-type gel. Their formulations provide different setting times, from very fast-setting to those that will stay liquid for up to 24 hours. “That gives the contractor plenty of time to penetrate that crack because sometimes you have to go really far to get the resin in there and the slower reaction times do come into play,” says Schmid.

Schmid says the choice between epoxy and polyurethane can be likened to whether you root for the White Sox or the Cubs. His preference is to heal hairline cracks with epoxy, especially if the crack is structural in nature because you can control the penetration of the material. Polyurethanes are a liquid that thickens up in the presence of moisture. “Urethanes are different,” Schmid says. “They are moisture sensitive.” Since concrete has residual moisture or other moisture present depending on the type of crack, the polyurethane will react with that moisture and form a permanently flexible waterproof seal.

Surface preparation is key for concrete crack repair and steps one is grinding and cleaning. High-strength anchoring epoxy paste is then used to install injection ports and seal the crack. Once the anchoring epoxy has cured, the crack is injected with an epoxy resin or polyurethane expanding foam. “This method allows you to completely fill the cavity for a waterproof seal,” explains Paul Trzcinko, the marketing lead at Rhino Carbon Fiber. The material is injected with an epoxy gun. Injection starts at the bottom port, and as the injected material fills the crack, it comes out of the port above. That port is then capped off and injection moves to the next port and the process continues until all ports are injected and the cavity is filled.

Carbon fiber is the least intrusive option and one of the most effective ways to fix a foundation issue. Carbon fiber can be used in a variety of applications including when there’s pressure being applied from the outside and foundation walls are bowing in. “Carbon fiber in general is an incredible concrete crack repair and structural strengthening product with a variety of uses,” says Trzcinko. “Rhino Carbon Fiber’s repair system provides crack repair and structural strengthening.”

Rhino’s carbon fiber Concrete Crack Lock stitches are widely used for pool repair, decks, or any other poured concrete structure. These are installed by making a single cut across the crack and drilling two holes at the ends of the cuts. Then the crack is filled with anchoring epoxy and the stitch is inserted to bond both sides of the crack together.

Rhino’s carbon fiber fabric comes in three different weaves: horizontal, vertical, and bidirectional. To strengthen a crack, the fiber filaments should run transversely to the primary direction of the crack. A bidirectional weave strengthens in both directions, and is a good choice for crack repair where the stress condition is not clear. To strengthen an entire structure, carbon fiber needs to be installed per the engineer’s suggestions. Rhino also has epoxy and polyurethane injection products for crack repair. Once the cavity is filled as described above, reinforcement with carbon fiber is the next step for a complete repair.

Todd Jackson, technical director and co-founder of Fortress Stabilization Systems in Michigan, is on the forefront of carbon fiber research. While carbon fiber itself is the most game-changing structural development in the past 20 years, the next forefront of advancement will be in anchoring. Fiber-reinforced polymer (FRP) systems can reinforce materials with glass fibers, aramid (man-made synthetic fibers, or carbon. In years past, most of the usage was surface-applied. “What we’re finding out is most of your FRP systems are going to be anchored in the next five years,” says Jackson.

Another advancement soon to hit the FRP industry is nano-modified cement-based adhesives which are being researched as replacement for epoxies because they are more fire-proof. “We’re seeing a lot being done using cementitious materials to bind the carbon,” he says.

The fortress is the company’s residential division that handles basements. They use an anchored system that is approved by the ICC-ES, or the International Code Council’s Evaluation Service.  The company’s commercial division is Fortec Stabilization, which offers anchors for bridges and overpasses along with crack repair stitch kits, carbon fiber sheets, and structural epoxy formulations.

Grouting, or curtain grouting, involves injecting polyurethane foam into a crack from inside the basement, through the concrete wall, to form a permanent waterproof barrier that adheres to the outside of the concrete wall. It dates back decades, to the late 1900s, as a method to control seepage around dams. Grouting begins with drilling a series of small holes through the wall in the area of the leak. Then, material is pumped through the holes. The material hardens on the exterior face of the wall and forms an impermeable curtain.

This method of sealing can address the issue of the water coming through the wall rather than sealing the crack on the inside. “But if there’s any type of soil shifting, droughts, or floods, it can disrupt that seal,” says Kaminski.

Piering is done when a foundation is sinking, typically because the soil is not holding the weight of the structure above. It’s not necessarily a failure in the building or of the construction, says Ty Petersen, marketing manager of Minnesota-based Safe Basements, which provides basement waterproofing and foundation repair. Piering requires getting down to a load-bearing strata. “Often, you place a pier bracket on a foundation  foot and then you push down pins or pipe to a load-bearing level, and then you can use that to lift the house back to level, or stabilize it if you’re not doing a lift,” he says.

This diagram shows many of Safe Basements’ foundation repair and waterproofing product options.

Safe Basements has a product called the SaberTooth Pier Bracket, which is the strongest and lightest pier bracket in the industry. It has a 49 kip capacity (a kip equals 1000 pounds-force) which allows for a high safety factor. Safety factor is calculated through an equation that factors the maximum capacity of a bracket, the weight for the structure, and how far apart the piers are from each other.

If piering is needed, especially in areas where the water table is high, you’ll likely have a water issue as well, so a contractor would want to pier and then waterproof. Sometimes, though, Petersen says, a contractor may need to put in a waterproofing system beforehand or there may already be a waterproofing system installed. If crack repair or any other repair is needed, that typically comes after the piering is done, although the order in which work is done depends on the situation.