Basement Leaks Where the Wall Meets the Floor

A leak in the basement where the floor meets the wall – called the “cove joint” – occurs for several reasons. First, the exterior basement walls may not be properly waterproofed. If they are, then water may be coming up from beneath the house instead.

Leaks in a basement are an issue that needs to be dealt with whether you have a finished basement or not. Left unchecked, they can degrade your home’s foundation, cause mold and mildew, and increase the likelihood of having pests.

In this article, we’ll take a look at why a basement might leak where the wall meets the floor. We’ll also go over all the ways you can go about fixing the issue of water coming in under your basement walls. 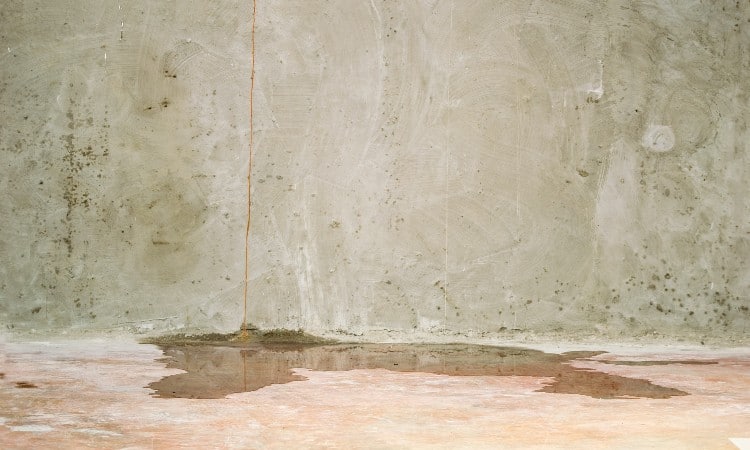 Why Do Basements Leak Where Wall Meets Floor?

Basements can leak where the wall meets the floor for several reasons. The footings for your house are poured separately from your basement walls. Therefore concrete blocks or poured concrete basement walls are not fused to the footings. Water can seep beneath this gap when there is poor or no exterior or interior waterproofing.

Reasons for leaks occurring where the basement wall meets the floor include:

No Exterior or Interior Waterproofing

If you have an older home, then chances are you have little to no waterproofing on your exterior basement walls. Many older homes simply have a layer of tar on their block walls, which can become damaged over the years and wear away.

Without a waterproofing membrane on the outside or inside your walls, water will find the path of least resistance to enter your basement. Gaps in the wall are prime candidates for water infiltration, and the joint where the wall meets the footing is often where leaks occur.

Even though your footing is concrete and your concrete block walls are concrete, it doesn’t mean that the joint is “sealed”. Similarly, if you have block walls, there will be a gap between the mortar and footing. While these gaps are tiny, they are enough for water to enter a home.

If your basement has exterior or interior waterproofing, it may be damaged if water enters beneath the walls. Building code stipulates that homes only need a waterproofing membrane to the base of the walls. It does not have to go over the footing, either. Therefore, water can still slip beneath the membrane and through the wall/floor joint.

If your waterproofing is intact, there is the possibility that your sump pump is damaged and not running. This is easily checked and fixed. If it does not run, water does not drain from around your home’s perimeter, and it will find its way into the house beneath the walls.

There is a chance the earth beneath your basement floor does not have adequate drainage. This is especially true for heavy clay-based soils. Your sump pump should not only be connected to your exterior – or interior – drain pipe but also have holes to allow the earth beneath the house to drain.

If there is no path for the water beneath your home to exit, then it will find a way up through your basement slab or the joint between the floor and walls.

Absence of a Sump Pump

Interior and exterior waterproofing are great – and necessary – but will eventually fail if no sump pump is present. A sump pump sits several feet below the grade of your footings and concrete slab and collects all the water around the perimeter of a house, pumping it to a location away from home.

If your house does not have a sump pump and sump pit, then this could be a big reason you have leaks beneath your basement wall. No home waterproofing is complete without a pump to take water away from your house. Luckily, you can install sump pumps without having to excavate your home’s exterior.

Weeping tile is just a black perforated plastic pipe with a white mesh “sleeve” over the top to prevent dirt from getting into the pipe. This pipe sits against the side of your footing and wraps around the perimeter of your house. One end should go beneath the footing of your house and attach to an interior sump pump.

A common issue with weeping tile is getting clogged, especially if you have older tile without the mesh sleeve. There are ways to unclog the tile, but this involves pressurized jets of water removing the clog – not ideal if you already have water in your basement. Ideally, you dig up the clogged pipe and replace it with a new tile that resists clogging.

What Is a Cove Joint?

A cove joint refers to the joint between a basement wall and floor. Specifically, it refers to the joint between a poured concrete wall and floor. When the footing is poured, contractors will put a groove into the center of the footing called a keyway. Then, when the wall is poured, it sits in that keyway and prevents lateral movement – this is called a “cove joint”.

However, it is common to refer to the wall/floor joint in the basement as a cove joint regardless of the type of wall. Thus, if you have a concrete block wall, contractors will still refer to the joint between the floor and block wall as the “cove joint”.

It is important to note that just because a poured concrete wall sits in the keyway of the footing, it doesn’t mean that the joint is waterproof. There will still be tiny spaces between the footing and wall that can allow water through.

How Do You Fix Cove Joint Seepage?

Let’s take a closer look at your options for fixing cove joint seepage:

The process for waterproofing the exterior of basement walls starts with excavation down to the base of the footings. Walls are cleaned and a self-adhering waterproof membrane is applied. Often another layer of “dimpled” membrane is also applied as an added layer of protection. This is nailed to the walls.

Once the membrane is installed, a layer of pea gravel is laid at the bottom, and then a weeping tile. The weeping tile should connect to a sump pump on the building interior. If not, one must be installed – usually in the corner of a house. The weeping tile then goes beneath the footing and connects to the sump pump.

Once the tile is installed, you will backfill with ¾” clear gravel to about 8” of your desired grade. Then you top it off with topsoil, being sure to grade the topsoil away from the house. This measure is the best way to get rid of cove joint seepage and protect your basement walls’ structural integrity.

Interior waterproofing requires a contractor to dig along the perimeter of the entire basement, removing concrete up to 18” away from the walls. They will then dig down 8” or so, fill the bottom with pea gravel, and install a weeping tile drain pipe. This will connect to an interior sump pit and pump.

Once complete, the only evidence of waterproofing should be the dimpled membrane covering the walls. You can then frame your basement as you normally would without worrying about leaks beneath the wall.

A third, more cost-effective solution to fixing cove-joint seepage requires no exterior or interior excavation. Instead, you can purchase plastic drain “channels” that sit against the perimeter of your interior basement walls.

These drains are fastened to the floor with epoxy, catching and channeling water entering beneath the basement walls into either a floor drain or a sump basin.

Sealing the basement wall/floor joint is never a good idea. Why? You are simply putting a band-aid on a problem that requires much more than a bead of caulk. IF you seal the cove joint, water will find its way in via another avenue, which could end up causing more damage than it did initially.

Let’s say you seal your cove joint. Water now needs another place to go. It will either find a crack somewhere else near the bottom of your wall or it will come up underneath your slab. You may even begin to notice damp spots on your slab. Sealing does not fix the problem, it only redirects water from the cove joint to another part of your basement.

These systems all work the same way. Utilizing plastic “channels”, they are laid flush against the interior cove joint and epoxied to the wall and floor. These are put around the perimeter of the interior of the basement and should end at either a floor drain or sump pit. The epoxy keeps the water in the channels.

IF water is only coming in through your cove joint, then using one of these systems could be a viable option. Again, it doesn’t solve your problem as you still have a “leak”, but you control it and minimize the chance of mold and mildew.

Insurance companies will cover sudden water accidents, such as a busted hot water tank. They may also cover busted pipes in the winter if the power goes out. But these are accidents out of the homeowner’s hands, whereas a leak is something you could fix anytime.

Luckily, most insurance providers will let you add on a water damage policy – for extra money – that covers basement water damage of all kinds.

Pay careful attention to the language in the policies – and water damage add-on to your insurance still might not cover something like sewer or basement floor drain backup. You may need an additional policy to cover multiple water issues that might occur in your basement.

Ideally, the exterior membrane should be installed past the cove joint and over the sides of the footing. If not, any joint near the footing is vulnerable to water entry. The other common reason exterior waterproofing doesn’t work is that weeping tiles get clogged.

As mentioned above, you can get your weeping tile unclogged, but this process is unreliable at best and you are putting lots of water against your basement foundation. Many new homes have their weeping tile connected to a couple of vertical pipes on either end of the house that acts as “cleanouts” where they can be cleaned regularly from above.

When it comes to cove joint leaks, you have several options that fit any type of budget. Exterior waterproofing will be the most expensive but should last you for the lifetime of your time in the house. Interior waterproofing is cheaper, but you are still allowing water through your basement walls.